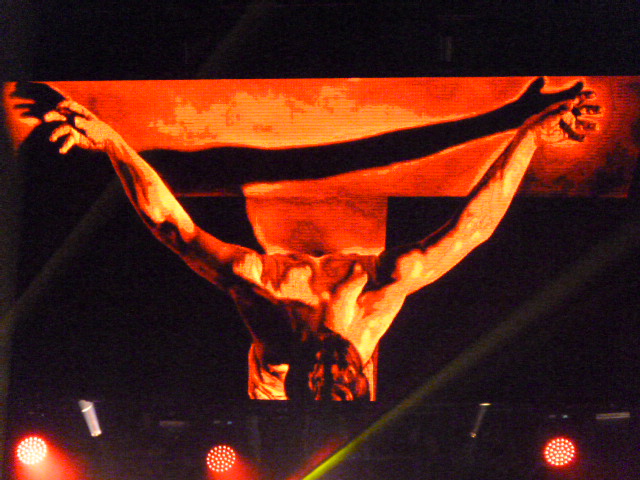 The cross.  The crucifixion.  Jesus.  His love.  His sacrifice.  His humility.  God’s Will.  Salvation for all.  Jesus went through a horrible death for you and me.  He suffered.  He was beaten.  He was tortured.  He was betrayed.  He was forsaken.  He wasn’t killed; He gave His life.  It was God’s plan.  This would redeem us.  It would save us from our sins.  We would be declared righteous by His blood, by His sacrifice, by His love and forgiveness.  Because of this, we can have eternal life if we believe and trust in Him.

Every event and every word that He spoke on this dark day would have significance.  It would teach us something.  It would reveal something about Him.  The gospels record seven phrases that Jesus spoke on the cross.  For the next few posts we will discuss the words and events during the Crucifixion.  Feel free to add comments on what these words and events mean to you.

Now from the sixth hour until the ninth hour there was darkness over all the land. And about the ninth hour Jesus cried out with a loud voice, saying, “Eli, Eli, lama sabachthani?” that is, “MY GOD, MY GOD, WHY HAVE YOU FORSAKEN ME?”

Some of those who stood there, when they heard that, said, “This Man is calling for Elijah!” Immediately one of them ran and took a sponge, filled it with sour wine and put it on a reed, and offered it to Him to drink. The rest said, “Let Him alone; let us see if Elijah will come to save Him.”

And Jesus cried out again with a loud voice, and yielded up His spirit.

Christ has redeemed us from the curse of the law, having become a curse for us (for it is written, “CURSED IS EVERYONE WHO HANGS ON A TREE”), that the blessing of Abraham might come upon the Gentiles in Christ Jesus, that we might receive the promise of the Spirit through faith. 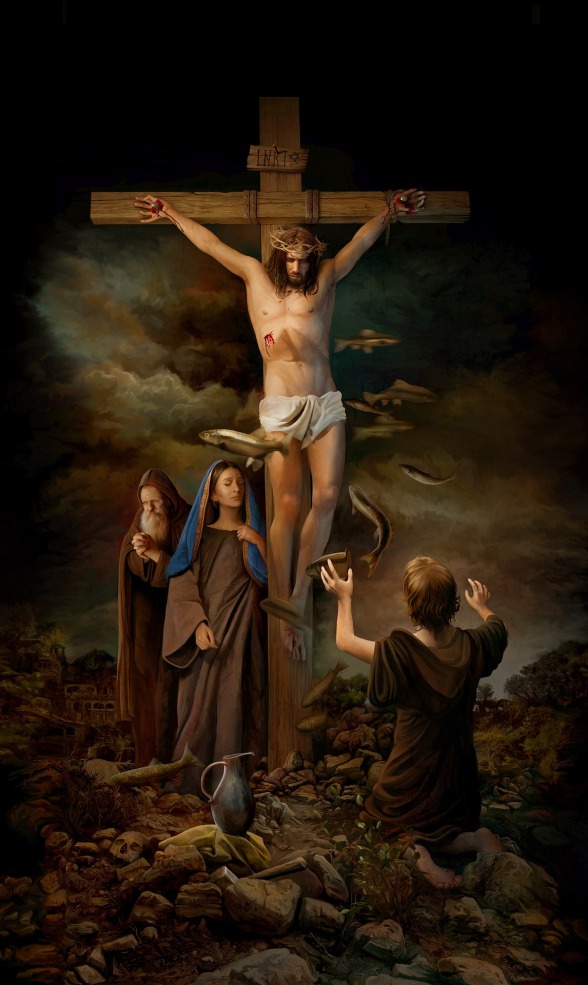 Matthew also describes some awesome events showing the power of God and revealing the New Covenant.  These events show the purpose of Jesus’ death and resurrection.

Then, behold, the veil of the temple was torn in two from top to bottom; and the earth quaked, and the rocks were split, and the graves were opened; and many bodies of the saints who had fallen asleep were raised; and coming out of the graves after His resurrection, they went into the holy city and appeared to many. So when the centurion and those with him, who were guarding Jesus, saw the earthquake and the things that had happened, they feared greatly, saying, “Truly this was the Son of God!”

There is so much going on in this paragraph!  First, the veil..the one that separates the Holy and the Most Holy Place, that separates the God from the people that only the High Priest is allowed to enter only after rituals and sacrifice, is torn…from top to bottom.  Only God can do this.  This is significant.  No longer are God’s people separated by God.  No longer is a High Priest (or any priest) needed to be the arbitrator between God and man.  We now have direct access to God through Jesus Christ.  He is our High Priest.

But Christ came as High Priest of the good things to come, with the greater and more perfect tabernacle not made with hands, that is, not of this creation. Not with the blood of goats and calves, but with His own blood He entered the Most Holy Place once for all, having obtained eternal redemption. For if the blood of bulls and goats and the ashes of a heifer, sprinkling the unclean, sanctifies for the purifying of the flesh, how much more shall the blood of Christ, who through the eternal Spirit offered Himself without spot to God, cleanse your conscience from dead works to serve the living God? And for this reason He is the Mediator of the new covenant, by means of death, for the redemption of the transgressions under the first covenant, that those who are called may receive the promise of the eternal inheritance.

The next thing to notice is God’s mighty power over the earth.  He created the earth and everything in it.  Perhaps this was His anger toward those who wanted to harm His Son or their defiance toward God.  Perhaps it was to show the Pharisees what little power they really had.  Perhaps it symbolized Jesus’ death as shaking the world and changing history.  Perhaps it was symbolic of salvation coming through faith.  Jesus said that those who have faith can move mountains. 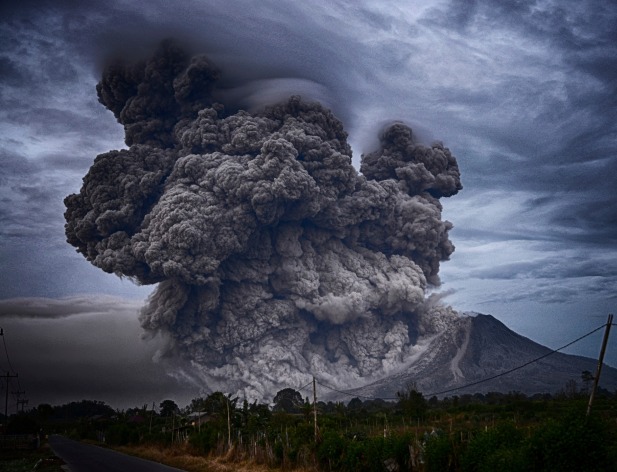 …for assuredly, I say to you, if you have faith as a mustard seed, you will say to this mountain, ‘Move from here to there,’ and it will move; and nothing will be impossible for you.

And then there were all these people who were dead coming out of their graves and coming into the cities.  I never noticed this before, but it occurred after Christ’s resurrection.  When He conquered death, all those who believed and longed for the Messiah were raised.  It was a declaration of victory over death.  Jesus came to give us eternal life.  He came to save us from death.  Death from sin. 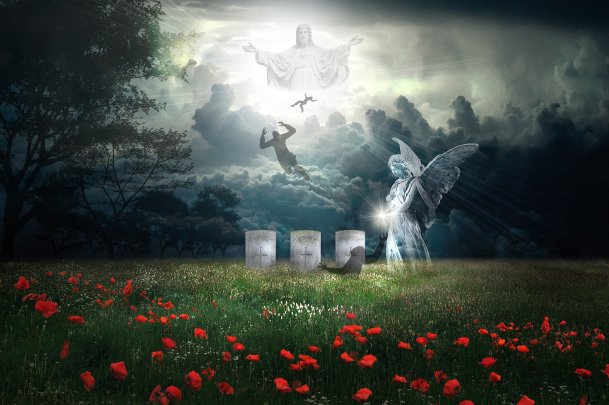 So when this corruptible has put on incorruption, and this mortal has put on immortality, then shall be brought to pass the saying that is written:

The sting of death is sin, and the strength of sin is the law. But thanks be to God, who gives us the victory through our Lord Jesus Christ. Therefore, my beloved brethren, be steadfast, immovable, always abounding in the work of the Lord, knowing that your labor is not in vain in the Lord.

One more thing from Matthew that I noticed.  Jesus was revealed as the Son of God…to a Roman centurion!  Not to the Jewish leaders, not even to a Jew.  A Gentile, a Roman soldier proclaimed that Jesus was the Son of God.  He is not the God of Jews only.  He did not come to save only the Jews, but everyone.  God sent His only Son so that ALL can be saved.

Let this mind be in you which was also in Christ Jesus, who, being in the form of God, did not consider it robbery to be equal with God, but made Himself of no reputation, taking the form of a bondservant, and coming in the likeness of men. And being found in appearance as a man, He humbled Himself and became obedient to the point of death, even the death of the cross. Therefore God also has highly exalted Him and given Him the name which is above every name, that at the name of Jesus every knee should bow, of those in heaven, and of those on earth, and of those under the earth, and that every tongue should confess that Jesus Christ is Lord, to the glory of God the Father.

Jesus Christ came to this earth, fully God and fully man, ‘God in the flesh’; He lived as a man, knowing what it is like to be tempted, to be hurt and so much more.  But because He is God, He is perfect, He was able to offer Himself as a sacrifice for sin, for everyone’s sin, once and for all.  He is our Redeemer, our Savior, our Lord and our God.