In some ways guilt and forgiveness go hand in hand, but in other ways they are completely opposite.  Without guilt there is no need for forgiveness.  Forgiveness is more about the forgiver showing mercy.  We can all receive forgiveness if we just believe and trust in Jesus Christ…and we all need it.  In my last post, we talked about how we should forgive, knowing that we have been forgiven too.  Jesus not only took our sins away, but He also took away our guilt.  Knowing this, we should e able to not only forgive others, but also forgive ourselves.

Now early in the morning He came again into the temple, and all the people came to Him; and He sat down and taught them. Then the scribes and Pharisees brought to Him a woman caught in adultery. And when they had set her in the midst, they said to Him, “Teacher, this woman was caught in adultery, in the very act. Now Moses, in the law, commanded us that such should be stoned. But what do You say?”  This they said, testing Him, that they might have something of which to accuse Him. But Jesus stooped down and wrote on the ground with His finger, as though He did not hear.

So when they continued asking Him, He raised Himself up and said to them, “He who is without sin among you, let him throw a stone at her first.”  And again He stooped down and wrote on the ground. Then those who heard it, being convicted by their conscience, went out one by one, beginning with the oldest even to the last. And Jesus was left alone, and the woman standing in the midst. When Jesus had raised Himself up and saw no one but the woman, He said to her, “Woman, where are those accusers of yours? Has no one condemned you?”

And Jesus said to her, “Neither do I condemn you; go and sin no more.”

If we confess our sins, He is faithful and just to forgive us our sins and to cleanse us from all unrighteousness.

The account of the woman caught in adultery is a good lesson for us all.  The woman was guilty.  She was caught in the act.  The pharisees were quick to condemn, but Jesus decided to show compassion.  Note that He did not say, “it’s ok, everyone make mistakes.”  He said, “go and sin no more.”  He said, in essence, “you are forgiven.”  What you did was wrong, you are forgiven, don’t do it again.  How often do all of us need to hear this?  And when we do mess up, He is our advocate.  Not only are we forgiven of our past sins, but He will forgive us of all of our sins.  Not only are we forgiven, but we are declared righteous before God.  Our guilt is taken away.  Through His blood, by His sacrifice, He has cleansed us for all…all!  unrighteousness.  He offers us assurance and hope in eternal life, we if accept it.  Let us encourage one another of the grace given to us, knowing that no amount of works and no other person can save us, only Jesus.  The author of Hebrews reminds us of this, that a blood sacrifice is needed for the remission of sins that only Jesus can provide.  No other priest, no other sacrifice.  He died once for all and our hope is in Jesus Christ, the Son of God, our Lord and Savior. 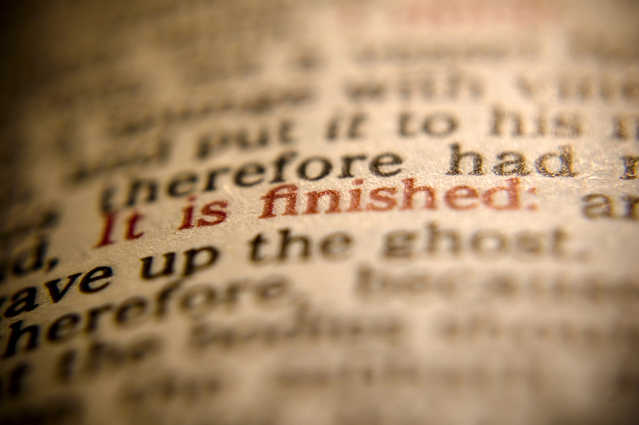 Seeing then that we have a great High Priest who has passed through the heavens, Jesus the Son of God, let us hold fast our confession. For we do not have a High Priest who cannot sympathize with our weaknesses, but was in all points tempted as we are, yet without sin. Let us therefore come boldly to the throne of grace, that we may obtain mercy and find grace to help in time of need.

But, beloved, we are confident of better things concerning you, yes, things that accompany salvation, though we speak in this manner. For God is not unjust to forget your work and labor of love which you have shown toward His name, in that you have ministered to the saints, and do minister. And we desire that each one of you show the same diligence to the full assurance of hope until the end, that you do not become sluggish, but imitate those who through faith and patience inherit the promises.

For when God made a promise to Abraham, because He could swear by no one greater, He swore by Himself, saying, “Surely blessing I will bless you, and multiplying I will multiply you.”  And so, after he had patiently endured, he obtained the promise. For men indeed swear by the greater, and an oath for confirmation is for them an end of all dispute. Thus God, determining to show more abundantly to the heirs of promise the immutability of His counsel, confirmed it by an oath, that by two immutable things, in which it is impossible for God to lie, we might have strong consolation, who have fled for refuge to lay hold of the hope set before us.

This hope we have as an anchor of the soul, both sure and steadfast, and which enters the Presence behind the veil, where the forerunner has entered for us, even Jesus, having become High Priest forever according to the order of Melchizedek.

But Christ came as High Priest of the good things to come, with the greater and more perfect tabernacle not made with hands, that is, not of this creation. Not with the blood of goats and calves, but with His own blood He entered the Most Holy Place once for all, having obtained eternal redemption. For if the blood of bulls and goats and the ashes of a heifer, sprinkling the unclean, sanctifies for the purifying of the flesh, how much more shall the blood of Christ, who through the eternal Spirit offered Himself without spot to God, cleanse your conscience from dead works to serve the living God? And for this reason He is the Mediator of the new covenant, by means of death, for the redemption of the transgressions under the first covenant, that those who are called may receive the promise of the eternal inheritance.

For where there is a testament, there must also of necessity be the death of the testator. For a testament is in force after men are dead, since it has no power at all while the testator lives. Therefore not even the first covenant was dedicated without blood. For when Moses had spoken every precept to all the people according to the law, he took the blood of calves and goats, with water, scarlet wool, and hyssop, and sprinkled both the book itself and all the people, saying, “This is the blood of the covenant which God has commanded you.”  Then likewise he sprinkled with blood both the tabernacle and all the vessels of the ministry. And according to the law almost all things are purified with blood, and without shedding of blood there is no remission.

Therefore it was necessary that the copies of the things in the heavens should be purified with these, but the heavenly things themselves with better sacrifices than these. For Christ has not entered the holy places made with hands, which are copies of the true, but into heaven itself, now to appear in the presence of God for us; not that He should offer Himself often, as the high priest enters the Most Holy Place every year with blood of another — He then would have had to suffer often since the foundation of the world; but now, once at the end of the ages, He has appeared to put away sin by the sacrifice of Himself. And as it is appointed for men to die once, but after this the judgment, so Christ was offered once to bear the sins of many. To those who eagerly wait for Him He will appear a second time, apart from sin, for salvation.

And every priest stands ministering daily and offering repeatedly the same sacrifices, which can never take away sins. But this Man, after He had offered one sacrifice for sins forever, sat down at the right hand of God, from that time waiting till His enemies are made His footstool. For by one offering He has perfected forever those who are being sanctified.

But the Holy Spirit also witnesses to us; for after He had said before,

“This is the covenant that I will make with them after those days, says the Lord: I will put My laws into their hearts, and in their minds I will write them,” then He adds, “Their sins and their lawless deeds I will remember no more.”  Now where there is remission of these, there is no longer an offering for sin.

Therefore, brethren, having boldness to enter the Holiest by the blood of Jesus, by a new and living way which He consecrated for us, through the veil, that is, His flesh, and having a High Priest over the house of God, let us draw near with a true heart in full assurance of faith, having our hearts sprinkled from an evil conscience and our bodies washed with pure water. Let us hold fast the confession of our hope without wavering, for He who promised is faithful. And let us consider one another in order to stir up love and good works, not forsaking the assembling of ourselves together, as is the manner of some, but exhorting one another, and so much the more as you see the Day approaching.

Therefore we also, since we are surrounded by so great a cloud of witnesses, let us lay aside every weight, and the sin which so easily ensnares us, and let us run with endurance the race that is set before us, looking unto Jesus, the author and finisher of our faith, who for the joy that was set before Him endured the cross, despising the shame, and has sat down at the right hand of the throne of God.

For consider Him who endured such hostility from sinners against Himself, lest you become weary and discouraged in your souls.