How often Jesus used the analogy of water to get His point across.  He calmed the sea.  He walked on water.  He turned water into wine.  He offered living water to those who believe by paying for our sins on the cross.  As Jesus was on the cross, He shows His humanness here.  He was thirsty.   He could have used His power in the same way.  But He didn’t.  He chose  to fulfill His purpose on earth by paying for our sins through His blood.  He chose to offer each of us living water.

After this, Jesus, knowing that all things were now accomplished, that the Scripture might be fulfilled, said, “I thirst!” Now a vessel full of sour wine was sitting there; and they filled a sponge with sour wine, put it on hyssop, and put it to His mouth.

Jesus answered and said to her, “If you knew the gift of God, and who it is who says to you, ‘Give Me a drink,’ you would have asked Him, and He would have given you living water.” The woman said to Him, “Sir, You have nothing to draw with, and the well is deep. Where then do You get that living water? Are You greater than our father Jacob, who gave us the well, and drank from it himself, as well as his sons and his livestock?” Jesus answered and said to her, “Whoever drinks of this water will thirst again, but whoever drinks of the water that I shall give him will never thirst. But the water that I shall give him will become in him a fountain of water springing up into everlasting life.”

This may be one of the most remembered of the events of Jesus’ memory.  Jesus approaches a woman and asks for a drink so that He could teach her.  It was a time when He announces (again to a woman as we mentioned in the previous post…how important women were to Him!) that He was the Messiah, he takes her to her sin and shows her that He offers salvation freely to all…sinner (we all have sinned), Jews, Samaritans and gentiles.

Then He who sat on the throne said, “Behold, I make all things new.” And He said to me, “Write, for these words are true and faithful.” And He said to me, “It is done! I am the Alpha and the Omega, the Beginning and the End. I will give of the fountain of the water of life freely to him who thirsts. He who overcomes shall inherit all things, and I will be his God and he shall be My son.

God the Father confirms what Jesus said.  He offers each of us salvation through His Son, Jesus Christ, through His blood on the cross.

“On the last day, that great day of the feast, Jesus stood and cried out, saying, “If anyone thirsts, let him come to Me and drink. He who believes in Me, as the Scripture has said, out of his heart will flow rivers of living water.” But this He spoke concerning the Spirit, whom those believing in Him would receive; for the Holy Spirit was not yet given, because Jesus was not yet glorified.

This is a promise.  Jesus says that those who come to Him and trust in Him, will receive the Holy Spirit who will remain in us to guide us to do God’s will.  He will give us strength and will always be praying for us.  God will bless those who seek Him and desire to do His will.

Blessed are those who hunger and thirst for righteousness, For they shall be filled.

Throughout Jesus’ ministry, He uses water to show His deity and to teach us.  His ministry starts with His baptism in the Jordan by John the Baptist, where God reveals that He is his Son.

It came to pass in those days that Jesus came from Nazareth of Galilee, and was baptized by John in the Jordan. And immediately, coming up from the water, He saw the heavens parting and the Spirit descending upon Him like a dove. Then a voice came from heaven, “You are My beloved Son, in whom I am well pleased.”

His first miracle was changing water into wine.  Perhaps this is an analogy too.  He often shows that water symbolizes life.  Wine symbolizes blood.  By His blood, we can have eternal life.

Jesus said to her, “Woman, what does your concern have to do with Me? My hour has not yet come.”

His mother said to the servants, “Whatever He says to you, do it.” Now there were set there six waterpots of stone, according to the manner of purification of the Jews, containing twenty or thirty gallons apiece. Jesus said to them, “Fill the waterpots with water.” And they filled them up to the brim. And He said to them, “Draw some out now, and take it to the master of the feast.” And they took it. When the master of the feast had tasted the water that was made wine, and did not know where it came from (but the servants who had drawn the water knew), the master of the feast called the bridegroom. And he said to him, “Every man at the beginning sets out the good wine, and when the guests have well drunk, then the inferior. You have kept the good wine until now!”

This beginning of signs Jesus did in Cana of Galilee, and manifested His glory; and His disciples believed in Him.

Jesus manifested His glory and continued to do so, and with water.  He calmed the water. He walked on water.  He gives us living water.

Now it happened, on a certain day, that He got into a boat with His disciples. And He said to them, “Let us cross over to the other side of the lake.” And they launched out. But as they sailed He fell asleep. And a windstorm came down on the lake, and they were filling with water, and were in jeopardy. And they came to Him and awoke Him, saying, “Master, Master, we are perishing!” Then He arose and rebuked the wind and the raging of the water. And they ceased, and there was a calm. But He said to them, “Where is your faith?” And they were afraid, and marveled, saying to one another, “Who can this be? For He commands even the winds and water, and they obey Him!” 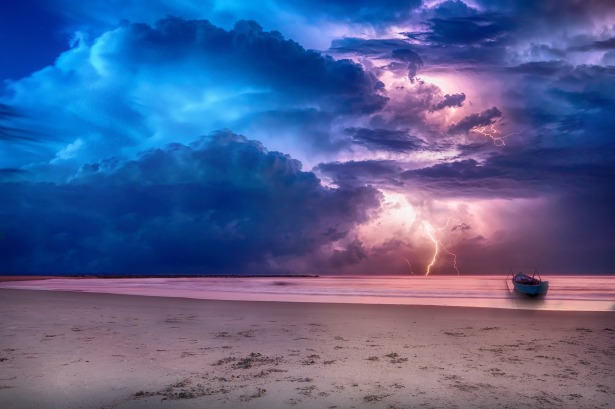 We can trust in Jesus even through the storm.  He is greater than any storm we face.  He created all things and can handle whatever we give Him.  He is able and faithful to help us get through our darkest moments.  Remember that we are saved through faith.

But immediately Jesus spoke to them, saying, “Be of good cheer! It is I; do not be afraid.”

And Peter answered Him and said, “Lord, if it is You, command me to come to You on the water.” So He said, “Come.” And when Peter had come down out of the boat, he walked on the water to go to Jesus. But when he saw that the wind was boisterous, he was afraid; and beginning to sink he cried out, saying, “Lord, save me!” And immediately Jesus stretched out His hand and caught him, and said to him, “O you of little faith, why did you doubt?” And when they got into the boat, the wind ceased.

Then those who were in the boat came and worshiped Him, saying, “Truly You are the Son of God.”

There are so many lessons I have learned from this scripture.  Again, He is stronger than the storm.  Nothing can stop Him.  Even in the storm, He is there and tells us not to be afraid.

We also need to remember that there will be times we need to “get out of the boat” and do something that may not be comfortable for God’s glory.  We all have a ministry.  He has called each of us to do something.  Notice Peter doesn’t just step out into the water (though often he says and does things on a whim without thinking, but this was not one of those).  He asks Jesus to command him to come out.  When we get involved in a ministry or anything we do, we need to stop and pray.  Ask God for guidance.  Ask Him if this is what He is calling you to do.  Then do it.  And when we do it, we need to keep our eyes on Jesus.  When we look away, when we focus on the storm instead of on Him, we begin to sink.  But, even then, we can reach out to Him and He will take you by the hand and pull you up.  How great is that!  I am so thankful of it and I am thankful that He gave us(He gave me!  He gave all of us!) that lesson and that assurance.